This is the sixth of nine installments in the Build an Excel Add-In series. In previous installments, we wrote some code to perform a useful task, enhanced its functionality to make it more broadly applicable, modularized the code and included an auxiliary modular procedure, built a dialog to ask the user for preferences, and brought all the code together. What remains is to construct the user interface elements for Classic Excel (2003 and earlier) and for new Excel (2007 and later), tie up a few loose ends, and create a setup file for easy deployment. A linked outline can be found at the end of this article. 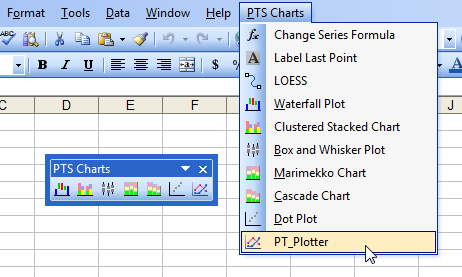 The Microsoft Office development team at Microsoft noticed some things about the command-bar-style interface, and about how users interacted with it. The interface was becoming complicated, with three or more levels of menus and submenus existing in some places. Each application ended up with its Tools menu, a kitchen junk drawer of commands that didn’t logically fit into the other menus. Users didn’t know what all the features were, or couldn’t find them, if they were buried more than a level deep, so they kept suggesting new features which already existed. Many users also didn’t know how to clean up their interfaces, so there were too many rows of docked toolbars and too many floating toolbars obstructing the workspace.

In response to the complicated nature of the command-bar-based interface and to the inability of some users to learn to use it as intended, the Microsoft Office team gutted the interface, replacing most toolbar implementations in favor of a new Ribbon in Office 2007. The ribbon is controlled using XML instead of VBA. Instead of toolbars which are visible all or most of the time, the ribbon has a set of different tabs. These tabs contain fewer buttons, and the buttons used more tend to be larger. The tabs become visible when the Office program thinks you might want to use them, and invisible when you actually do want to use them. No parts of the new interface can be undocked, so users who didn’t know how to click the close box of a floating toolbar now have clean interfaces, while users who like dispatching toolbars and palettes to areas on the screen where they are needed have to resort to extra mouse travel distances and excess mouse clicks. The ribbon-based interface is easy to customize using the RibbonX XML dialect and related VBA callbacks, but it is practically inaccessable through the user interface. Unless, of course, you count the QAT (Quick Access Toolbar), which is like a Classic toolbar on strong sedatives. Fortunately the ability of a user to customize their own interface was resuscitated for use in Office 2010.

This article will show how to construct a simple set of Classic Excel menu and toolbar customizations using VBA. The next article in the sequence will show simple XML code and VBA callbacks for use in New Excel.

The object model for the Office command bar system is straightforward. The CommandBars collection contains menu bars, standard toolbars, and popup menus (context or right-click menus). There is a lot of documentation of this system on the internet. This article shows a set of simple, hard-coded routines, all that is necessary for this simple add-in. There are a number of examples of more elaborate and flexible routines that use tables in Excel workbooks to define all of the interface elements to be created. John Walkenbach describes Creating Custom Menus using his MenuMakr system. I started with his system, but like any good engineer, I tweaked it beyond all recognition to create the system I use in my own add-ins and in projects for my clients.

Here is the simple code in its entirety, copied out of its code module. Explanations for selected sections of the code follow the complete listing.

sToolBars is a pipe-delimited string of command bars which will be customized. The remaining constants list the button caption and the name of the procedure to be run when the button is clicked.

Create_PTPlotter_Menu is the routine that adds our buttons to the Classic Excel interface. The first command in this routine is Delete_PTPlotter_Menu, which removes any existing buttons from this add-in which have somehow been orphaned due to a disorderly shutdown.

The pipe-delimited string is converted into an array of command bar names. The program loops through this array, looking for command bars with each name. If such a command bar is not found, then a new standard command bar is created using that name, other wise the program continues with the found command bar.

The button is assigned its tooltip text, which appears when the cursor passes over the button.

Built-in button image number 422 is used for the button’s icon. Display FaceIDs is a simple utility that helps you browse Excel’s button images. Not described here is the means to assign a custom button image.

Finally the button is made visible, so users can find it.

Delete_PTPlotter_Menu goes through the command bars listed in the pipe-delimited string, looking for buttons with the name used by our add-in. This is done inside Do loops, in case multiple crashes left behind multiple identical buttons. If the last button of a menu or toolbar is deleted, the empty menu or toolbar is also deleted.

Our Menu and Toolbar

The menu and toolbar customizations produced by the code above are displayed below.

The menu is on the Worksheet Menu Bar; the menu on the Chart menu Bar is the same. The PTS Charts menu and the PTS Charts toolbar already existed, with a variety of my utilities displayed, and the PT_Plotter button is added at the end of the list.

Contents: How to Build an Excel Add-In