In Republicans Blamed Most for Ineffective Government in U.S. Poll, Bloomberg show results of a poll that asked who was to blame for ineffective national government in Washington. Their results were shown in this donut chart: 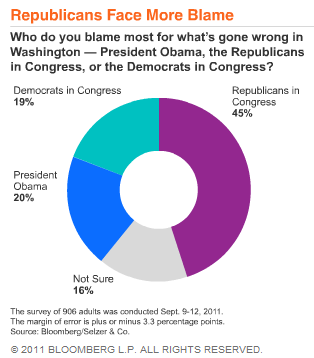 I was pointed to the Bloomberg article by Kevin Drum of Mother Jones, who wondered in Everybody Hates Everybody Else why Bloomberg used a donut chart to plot the data, though he did not elaborate. We’ve been trained to cringe at pie and donut charts, and replace them with bar charts: 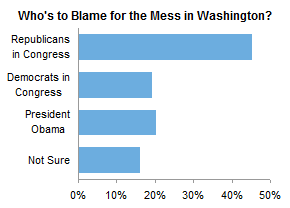 Ah, we can breathe freely again. And we can see that people blame Obama slightly more than Congressional Democrats. This 1 percentage point difference was not apparent in the donut chart, and really it may be meaningless given the poll’s 3.3 percentage point margin of error. Of course, the Republicans have collected by far more blame than any other category. This is clear in both charts.

There is one reason to use a pie for this kind of data, though. Stephen Few himself described The Secret Strength of Pies in Save the Pies for Dessert. Pie charts have an advantage over simple bar charts when you want to compare not single values, but subtotals. What the donut chart above shows is that the total blame assigned to Democrats, the sum of Congressional Democrats and President Obama, is less than the blame assigned to Congressional Republicans.

The pie chart below shows this difference even more clearly: we have not cut out the central region of the pie, which has central angles as well as the areas of the points to help us decode the chart’s values. 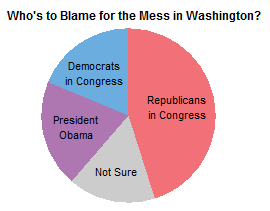 Sometimes this strength of pies is not realized, because data sorted differently may not have related slices in adjacent positions. However, if you know some categories are related (the two Democrat categories here), you can sort the data to make use of this feature of pie charts.

Then again, if you know some categories are related, you can convert the simple bar chart into a stacked bar chart, which sums related quantities linearly instead of circumferentially. This easier comparison allows us to see that Republican blame exceeds Democrat blame by almost twice the margin of error. 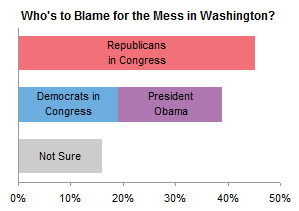 Bloomberg’s choice of chart type may not have been as bad as our initial reaction indicates, assuming the data was purposely sorted the way it was. Our stacked bar chart is an even better choice.