Happy Birthday to Me!

As promised last week, the Advanced Edition of the Peltier Tech Chart Utility is here.

The new software has all of the goodies of the current product, and nearly doubles it with lots of new custom charts and a handful of new features.

Here are how the products line up. 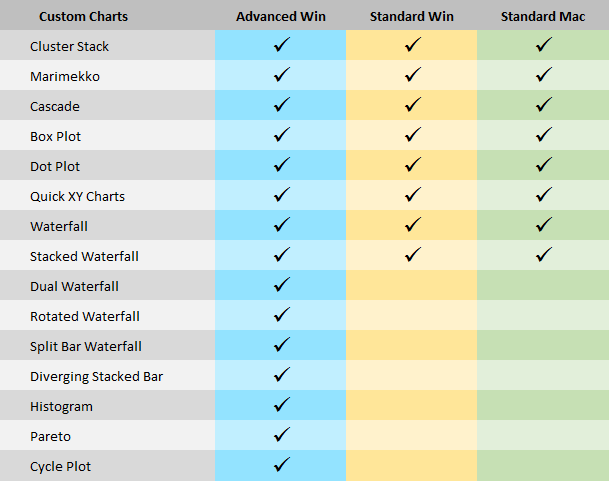 You’ll notice all of the new charts, including several more variations on waterfall charts. I guess you can never have too many variations on that theme, because folks are always asking for this or that “minor” adjustment. (“You can do it, you’re smart.”) The split bar is like having a separate waterfall for each bar of the waterfall

There are a couple variations on the histogram. The bars are the same, but the horizontal axis is built in two different ways, both of them better than plain old column charts in Excel, and better than the histogram in the Excel Analysis Toolpak. 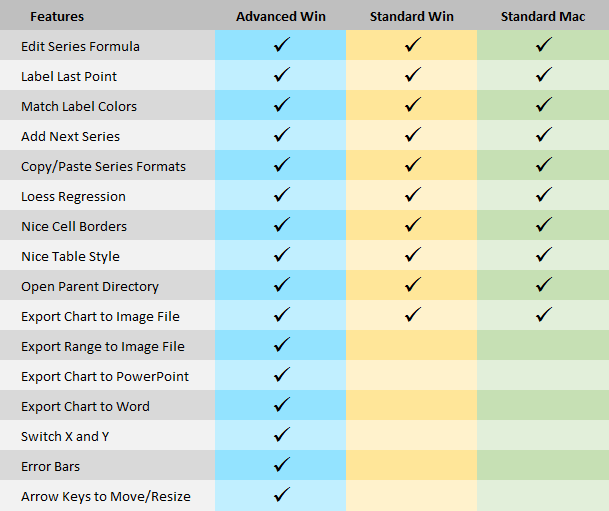 While mulling over a thread in the Mr Excel forum not long ago, I came up with the routine that nicely exports a range to an image file. This is a nice companion to the Export Chart feature that’s been a staple of the Standard Edition. The Export Chart to Word and PowerPoint are goodies that I would toss into projects for clients, because they are cool and they didn’t know they wanted them.

Switch X and Y is a feature I built for my own use back in the day, when my company was still using Excel 97 and the rest of the world was using 2003. Very handy.

After I played with Jon Acampora’s tool to Move and Align Chart Titles, Labels, Legends with the Arrow Keys, I dusted off and finished my own arrow key positioning device and added a resizing function. It’s pretty cool, but there’s still some funny business when you make the first adjustment to the size of the plot area, at least in Excel 2013.

You should also notice that against all odds, the green column has every single one of the items in the yellow column. My previous product release was the Mac version of the Standard Edition of the Utility, and I was very pleased that I was able to get everything into the Mac version. Of course, the devil now owns 3/8 of my soul. Or Steve Jobs. Or do I repeat myself?

First, I’m going to have to write some articles about using the Utility. I figure each topic will yield a blog post and a section of the online documentation.

Next, or in parallel, I’m going to put together a Mac version. I still have 5/8 of a soul for collateral.

Finally I’ll keep working on more custom charts, and this Advanced Edition will be the repository for them. On my slate are run charts, grouped box plots, tornado (sensitivity) diagrams, simple panel charts, and finally, a revival of the trellis charts based on my old Panel Chart Utility.

Among the charting features I have in mind are a zooming function, where you draw a box around points on the chart, and the axes will adjust to blow up those points. This box-drawing tool could be repurposed to allow selection of a subset of data, placing it into a new series for its own analysis. Also I was working on a point dragger, where you would click and drag on a plotted point, and the cell data would change to reflect the new position of the point. That was a popular feature in Excel 2003 and earlier, and Excel 2007 killed it along with all of those kittens.

How Can You Get The Utility

Go to the Peltier Tech Chart Utility page to license the utility. There are a few special deals.

From now through next Wednesday (June 18), you can buy the Advanced Utility for the price of the Standard Edition, by entering a coupon code found on the Utility page.

If you have a valid license for any of the older one-chart utilities, email Peltier Tech to get a different coupon code that will get you the Standard or Advanced Edition at a 50% discount.

As always, there are discounts for quantities greater than one license.